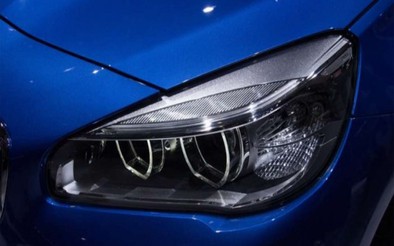 Stating the obvious, the function of a car headlight is to produce light so that the road and other hazards are visible in the dark, as well as informing other road users that you are there. You would be forgiven in thinking that headlights are that simple. There is in fact a lot more to a headlight than meets the eye.

Outlined below are the current options for comparison for various headlight design features. I say “current options” as these are constantly being upgraded and improved as new technologies are coming to the fore.

At present, there are two types of housing. Reflector housing is exactly that – the light from a bulb is reflected off the shiny background that throws the light forward onto the road.

The reflective surface is shaped in a way as to focus the light as best as possible, although, because of the nature of the design there is a lot of dispersal of light which means that the illumination is not as effective as the projector type housing, and there is more glare for oncoming motorists.

Projector headlights housing projects the light rather than reflects it. The light coming out of these headlights are more controlled and therefore the illumination better as well as safer for oncoming traffic.

When considering the performance of a headlight, one must look at the amount of light (the illumination) given of, as well as the contrast and cut-off given. It is no use having a really bright light that is spread all over the place – it must light up where it needs to light up.

There are three different bulbs that are available – halogen, Xenon and LED. The oldest technology, the halogen bulb, generally gives the least bright light, typically in the region of 1400 lumens. Because of the design of the bulb and the fact that most of these are used in reflector type housings, the light is not as focused as it could be.

The Xenon and LED bulbs give about the same amount of light (in the region of 3000 lumens) – with the top end LEDs possible of giving slightly more. The color temperature of the LEDs are generally set at about 6000K, giving a bright, crisp light with high contrast. LEDs and Xenon lights are generally used in projector type housings which give a more focused beam.

The LED bulb trumps both the other two types of bulbs with respect to energy consumption. Halogen bulbs are energy intensive, with Xenon being less so, but not as conservative as LEDs.

Although this will not affect the actual working of the headlight, it is something to consider in terms of energy used by your car, and therefore emissions. Secondly battery life is obviously affected with the higher load required from it.

The durability and longevity of the bulb types is pretty much linked to the age of the technology. The halogen bulbs will need to be changed after 450 to 1000 hours of use, whereas Xenon bulbs will generally last about 2000 hours.

It is claimed by manufacturers of LED bulbs that they will last for 30, 000 hours of continuous use. The technology certainly suggests this, but because LEDs are fairly new technology on the market, these claims are still to be statistically proven.

The price of the three different bulbs again is linked to age of the technology. The halogen bulbs, which first came onto the scene in the 1960s, are the most common and therefore the cheapest option.

Xenon lights or best hid kit, next on the market, are next in the price line. LED bulbs, newest to the headlight market, are the most expensive. Having said that, they are coming down in price depending on what quality you buy and where you buy them, they are in the price bracket of most modern car owners.

The most obvious factor to consider when comparing headlights is the age of the technology. The reason for throwing money at R&D projects is to improve on existing technology. So it would be safe to say, the newer the technology, generally the better the product. As always, however, new technology comes at a price.

The important questions to ask yourself is what exactly do I want from my car headlights, and how much am I willing to pay?