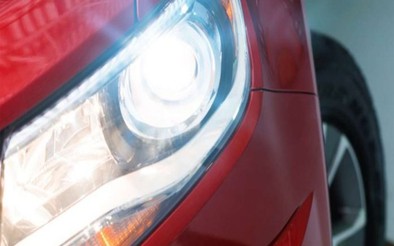 The original “headlamp” on an automobile, was a kerosene (oil) lamp. The brightness of this was about the same, or slightly higher, than a candle. This was on the automobile not to illuminate or light the road ahead, but rather to tell other users of the road, be they other automobiles, people or horse drawn carriages that they were there.

The improvement was acetylene headlights, which actually did throw a beam so that the driver could see the road ahead. These, however, as one can image, were not very bright. But then again, for the speed the automobile travelled at, did they need to be bright?

As the car was developed further, and technology in them increased, and as they got faster, better headlights were needed. Headlights that would make it easier to see.

The emphasis on safety grew, and as manufacturers included in the design of the cars such things as crumple zones and airbags, so the headlight was also included on the list of improvements for safety.

Brighter headlights were needed, making potential hazards easier to see sooner to prevent accidents. But developers also needed to ensure that with the brightness the safety of other road users, in particular oncoming traffic, was not compromised.

Brightness of a headlight, although it can be measured, also has other contributing factors that give a perceived brightness. So although a beam may be scientifically brighter than the next one, it may not seem to be. This is affected by the design of the bulb and the actual housing itself.

There are various units that light intensity, or brightness, is measured in. Candlepower is one of them. The most common, and Standard International unit of measurement of brightness of a light source, is the lumen (Lm).

To put things into perspective, a candle emits about 12 to 13Lm. A standard bulb used in a home sits at about 1000Lm.

How bright are car headlights?

Let’s go back to the beginning to emphasise how far we have come. The kerosene lamp used on that first automobile, depending on the design of the lamp, and the wick in particular, would have emitted between 8 and 100 lumen.

In comparison, bright car headlights bulbs halogen headlights, which have been around since the 1960s, generally produce around the 1400Lm mark. Xenon or HID (High Intensity Discharge) headlight bulbs emit around 3000 lumens. LEDs produce around the same with some on the market producing up to 4800Lm. We look at some the hid kit reviews and help you decide on the best

One must remember, that the combined brightness of these headlights is double, there being two headlights. So you are looking at 2800Lm for a car with halogen bulbs, 6000Lm for Xenon and most LED headlights and up to 9600Lm for some top end LED headlights.

Compare that to the bulb in your house, and you have some serious light.

There is however, a technology that has been around for many years that is now being developed for use in headlights. Lasers!

Developers are talking about the possibility of these being 1000 times brighter than LEDs! There are obviously specific designs that are going to be incorporated to be able to use these lights – you can’t have two concentrated beams of light burning holes in the trunk of the car in front of you!

One of the ideas that BMW are working on involves firing lasers at phosphorus gas, which is what actually produces the light, making the system friendly enough to be incorporated in road travelling vehicles. This system will essentially have a range that is double that of LED headlights!

Measurements of brightness aside, perceived brightness is also affected by the color of the beam – is it white like daylight, or blueish in color – giving it a “duller” appearance?

Furthermore, how concentrated or crisp the beam is, as opposed to dispersed, can also affect the perceived brightness of a beam of light. This is affected by the color of the beam and whether the light is reflected or projected? Headlight bulbs and housings are designed to produce headlights that are bright enough to light your way safely.

To answer the question, and setting aside factors playing into perceived brightness, the brightest bulb on the market at present is most probably an LED, but watch this space – the laser headlights are coming…